What is a Looper Tube Traffic Cone and Why Use It?

When planning work projects of any type there are many different types of traffic safety cones and products you can use. These plastic traffic barricades come in a wide variety of sizes, shapes, and colors. While just about all plastic barriers, including traffic cones or water filled jersey barriers instruct cars, and often people, to keep out or detour around, some are sturdier than the others. For instance, jersey style concrete barriers are very difficult to move from job site to job site. However, water filled jersey style barriers allow you to move them easily.

By using barriers that are flexible, you don't have to constantly order new things every single time you get a new job that requires it. Water filled jersey barriers come in a variety of colors, allowing you to alternate them from orange to white to increase their visibility on a job site. They come in a variety of sizes including 5’ and 6’ lengths, meaning no matter how large the area, you should not need too many water filled jersey barricades to close it off from the rest of the world.

A Looper Tube traffic safety delineator posts allows even more flexibility. The Looper Tube traffic safety delineator post is manufactured from durable high density polyethylene, with UV inhibitors added to minimize fading. The recessed areas on the Looper stem help protect the reflective sheeting from tearing and scratching.  An extra large flange on the bottom of the Looper Tube securely holds the base in place. The Looper Tubes unique "loop" style handle make grabbing and moving a breeze, as well allowing for the formation of pedestrian barriers with caution tape. Closing off an area of the job site is quick and easy utilizing the unique "loop" style handle with two or more Looper Tubes tied together with caution tape, flag line, plastic chain or rope. Looper bases are made from 100 percent recycled rubber in 12 and 18 lb weights - with convenient carrying handles.

The traffic safety Looper Cone comes with a patented reinforced handle design so they can be stacked without sticking together. They are made out of a durable low density polyethylene plastic that keeps the cones shape, reducing crushing and breaking. The Looper Cone’s convenient handle design allows for easy movement and placement. Both the Looper Tube and the Looper Cone will accept a standard or “D” cell barricade light.

To view a wide selection of these products, visit TrafficSafetyExperts.com
Posted by Ron@crowdcontrolexperts.com at 7:54 AM No comments:

When You Buy Cheap Imported Stanchions, Are You Putting Your Customers At Risk?


As an expert in domestic manufactured and imported stanchions, CrowdControlExperts.com knows what you need to look for in a safe stanchion. Cheap imported retractable belt stanchions selling on the market for $24, $34 and $39 could be putting your customers at risk. Many of these stanchions do not contain a braking system to slow the retraction of the webbing when it is released. If a child is playing with this belt in line, and lets the belt mechanism go, it could accelerate at a speed equivalent to 85 mph, faster than a formula 1 car off of the starting line according to recent studies! When this snaps back at that speed and hits another customer in line, it will likely inflict an injury that you may be liable for.

Many domestic manufactured stanchions are the safest barriers on the market. They contain patented breaking technology systems that slowly retract the webbing, allowing it to fall to the floor upon release and then slowly and safely retract back into the post, eliminating the risk of an accident within your queue. Domestically manufactured stanchions also contain anti-tamper tape ends that require you to actually press a button to release the tape end connected to the post, thus preventing accidental release of the webbing by customers in your line. Cheap imported stanchions can be bumped into and their retractable belts can be dislodged, snapping a fast belt end back at an unsuspecting customer waiting in line who could be injured.

May the buyer beware…this is truly a case of getting what you pay for. Let CrowdControlExperts.com help you make a safe, wise stanchion purchasing decision.

Posted by Ron@crowdcontrolexperts.com at 2:14 PM No comments:

Here are some of the top reasons to choose our plastic stanchions and chain. 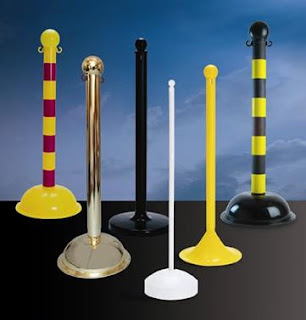 SAFETY.  Not only do we use plastic chain and stanchions to promote safety and reduce injury, plastic has been proven to be a safe material to use. Plastic does not shatter or break when dropped. It is a great alternative to glass or metal especially when used around children.

RUST RESISTANT. Unlike metal products, plastic products are rust resistant therefore allowing a wider and more versatile range of use. In addition to being rust resistant, our plastic stanchion and chain products are also fade and weather resistant.

AESTHETICALLY PLEASING. Along with the flexibility and many uses for plastic in general, Our products are aesthetically pleasing with their bright colors and many shapes and styles.

ECO-FRIENDLY. Before plastics were recyclable, it was understood that it could take up to 500 years to disintegrate on earth. All of our plastic stanchion and chain products can be recycled. In addition to the long life of these plastic posts and chain, we can all use the material with ease knowing it doesn’t have to end up in the garbage.
Posted by Ron@crowdcontrolexperts.com at 11:13 AM No comments:

What are Stanchions and how do you use them?

Stanchions are used for many different purposes such as crowd control, waiting lines, marking off areas, protecting art or cars, designating “Do Not Enter” or “Protected Equipment” or dangerous areas. Many different places use stanchions including banks, restaurants, trade shows, arenas and they have many other applications. They can be line barriers or queue barriers that you often see in airports, movie theaters, hotels, restaurants, sport venues and anywhere crowd management is required. Stanchions for crowd control and crowd management purposes are defined as upright posts with a retractable belt, stanchion post rope, or plastic chain that serves to control and manage crowds.

For those on a budget, or if you need a lightweight crowd control system, we recommend plastic stanchions and chain. They are lightweight and can be filled with gravel or sand for added stability. Plastic stanchions come in many different styles and colors ranging from black to chrome. They are made of high quality plastic for durability and stability.
Posted by Ron@crowdcontrolexperts.com at 10:02 AM No comments:

CrowdControlExperts.com will now take the complexity out of designing queues by offering our comprehensive design services free of charge. CrowdControlExperts.com will help customers select between retractable belt posts, classic posts and ropes, post beam and panel, and merchandising stanchion options to boost impulse sales by up to 400%, increase margins by up to 30%, convert waiting time into extended shopping time and transform dead queuing space into valuable additional retail space. Offering years of experience and design expertise, CrowdControlExperts.com can help customer’s better merchandise and market products leveraging experts who have installed thousands of queue management systems and In-Queue Merchandising systems.

Leveraging a wide selection of products, solutions designed by CrowdControlExperts.com can add value to any retail associated environment, from brand communication to space division, display & signage to retail in-queue merchandising. CrowdControlExperts.com will help you select between retractable belt stanchions, classic post and rope stanchions, or beam and panel options. Retractable belt stanchions provide maximum flexibility and easy storage. While classic posts and ropes provide a traditional and elegant look. Beam posts, beams and panels offer a more sturdy and flexible system of crowd management. Beams help prevent portable posts from being pulled over by downward pressure. Panels can be added to beams for additional visual impact and control. In-Queue Merchandising panels can turn your line into a profit center. The experts at CrowdControlExperts.com will help customers select from a comprehensive offering of post, tape and rope colors and finishes that fit virtually any decor. Branding options that advertise a logo or communicate a message to a captive audience are also available to be designed into the solution.

Portable posts allow for the greatest flexibility and are by far the most popular. Fixed posts are permanently mounted to the floor and used where a traffic pattern is determined to be unchanging. A flexible alternative to fixed posts are removable posts, which can fit into floor sockets and may be temporarily removed. CrowdControlExperts.com will sketch a layout, check the post spacing specifications for the correct products selected, allowing at least three feet for aisles, include all appropriate signage and be sure to review ADA and Safety requirements that must be met.

In-Queue merchandising is another option that is a highly adaptable, modular system that consists of a series of slat and slot merchandisers, graphics and panels to create a wide range of structural designs for all types of queue environments. It includes standard or customized header panels, to incorporate branding or advertise promotions, a wide range of merchandising accessories from baskets, bowls, shelves, hooks and prongs, and infill or poster panels that help promote brands and open up advertising streams.

Now you can enhance the efficiency of your lines by adding Electronic Line Management systems. Electronic Line Management systems are extremely flexible and easy to incorporate into the overall queue management solution using new electronic queuing technologies. Media sales can even be integrated into today’s queues, merging state of the art technologies with design and functionality.
Posted by Ron@crowdcontrolexperts.com at 10:17 AM 1 comment:

(www.crowdcontrolexperts.com) – There was an instant buzz as Crowd Control Experts announced the most customizable stanchions in the industry today. CrowdControlExperts.com now offers over 200 finishes for the Retracta-Belt and Conventional Post product lines. CrowdControlExperts.com also expanded the belt and rope color options. These expanded finishes, belt colors and rope options allow any customer the unmatched ability to customize their crowd control solutions. Many large customers have requested additional finishes and customization to meet their internal needs and CrowdControlExperts.com responded.


In addition to the customization of the stanchion posts and bases, the belts can also be customized using either a silk screen or dye sublimation process. Dye Sublimation (a.k.a. Dye Sub) is a digital printing process used to create complex graphics and gradients onto fabric. CrowdControlExperts.com can now Dye Sub anything an ink jet printer can print onto a stanchions retractable belt! Silk screening is very similar to stencil painting. Ink is applied over a stencil and ink is applied to the belt's surface in the desired areas. It produces crisp but simple one or two color graphics. Both methods allow companies to brand their stanchion belts around product or corporate branding needs to further their brand reach. Company’s using these stanchions in arenas or at events can now sell advertising on the retractable belts themselves, easily replacing the belts from event to event, enabling these companies to tap a new advertising gold mine.


Take it one step further and the crowd control stanchions can also be branded with custom post cap labels and post base labels. Place a company logo on the label for easy identification, advertising or security needs.

Stanchions, Traffic Safety & So Much More